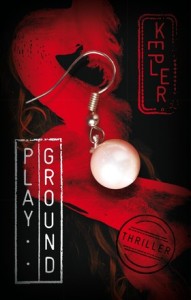 Jasmin Pascal-Anderson is a lieutenant in the Swedish military. During a NATO mission in northern Kosovo, Jasmin is fatally wounded. Her heart stops for a full forty seconds before she’s brought back to life. When she wakes up she tells of her experiences while clinically dead: she was transported to a mysterious port city, the port governing the transition between life and death, a horrible place where the system is no longer fair.

Back in Stockholm, Sweden, Jasmin starts work as a secretary and leads a quiet life. Until one day, when Jasmin and her five year old son are involved in a serious car accident.

At the hospital, the doctors realise they will have to perform heart surgery on Jasmin’s son to save him from dying. During the operation, they will briefly stop his heart.

No-one can say for certain whether the near-death stories told by those who have returned to life are true, but Jasmin cannot take the risk. She knows her son won’t make it back to life if he’s sent to the cruel and violent port city on his own – if the memories she has from dying are true.

The other side is a very dangerous place, and the most dangerous of all – the playground.